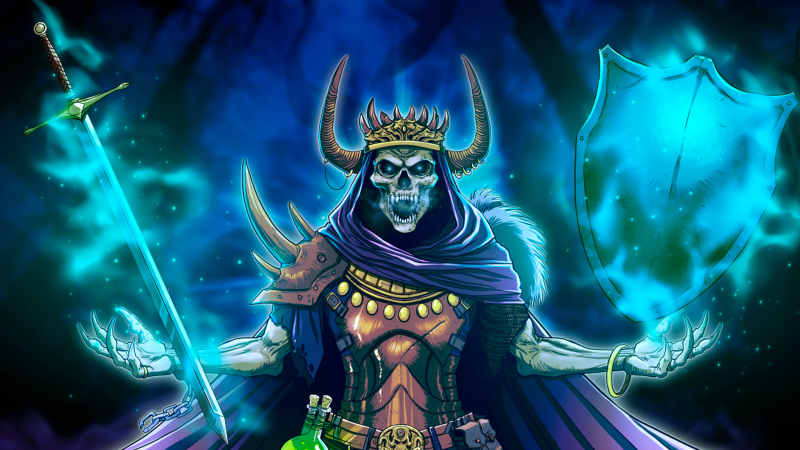 Bone Marrow is a unique RPG-puzzle game where you'll combine items to increase your stats as you fight off the undead.

I've never played a game like this before and it's actually quite hard and confusing to get your head around. Essentially you can move in 4 directions - up, down, left and right. Whenever you press a direction, everything in the level will slide that way until it hits something to stop it. If 2 identical items are moved into each other they are combined, so for example 2 shields with 2 armour each will be combined into one shield with 4 armour. These items can be combined all the way up to 32 as they double each time you combine them with another identical item.

The game also features a day/night cycle based on how many moves you've done. At night, you can move to combine the items but can't pick them up, but in the day you will pick up the items by moving into them. There should be a bit of tactical planning on your behalf, combining items to make them more powerful at night then grabbing them in the day but this isn't really necessary and you'll probably find yourself just mashing random directions and letting the game do the work for you.

After every few days have passed, an enemy will usually appear and you can only fight it in the daylight. You'll attack the enemy by moving to the next square then pressing in the direction towards the enemy. The combat is based on your attack and defence which you increase by picking up swords and shields. Each enemy has their own attack and defence too and based on your movements, the enemy can also pick up items to increase their stats. If you had 100 attack and the enemy had 50 defence, you'd wipe out their defence and 50 of it's health, but you lose your attack points after using them and also lose your defence based on the enemies attack so the plan is essentially to build up your attack and defence until it's more than your enemy, then attack them until they are defeated.

As you pick up items and defeat enemies you'll earn XP which goes towards increasing your rank. As you rank up your max health is doubled, but you'll generally fight enemies that are the same level as you so their max health will be the same. Each level requires you to grind your way up to rank 6 then defeat the 'king' enemy.

Thankfully there is a slower but easier way to get through all of the required levels for the Platinum which I've detailed below. You'll need to complete the first 2 levels then complete a few misc trophy requirements, most of which will probably just come naturally as you play through the game. 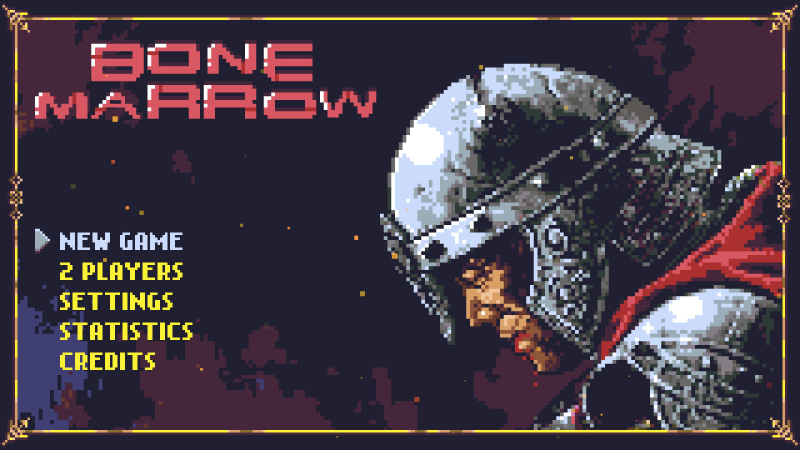 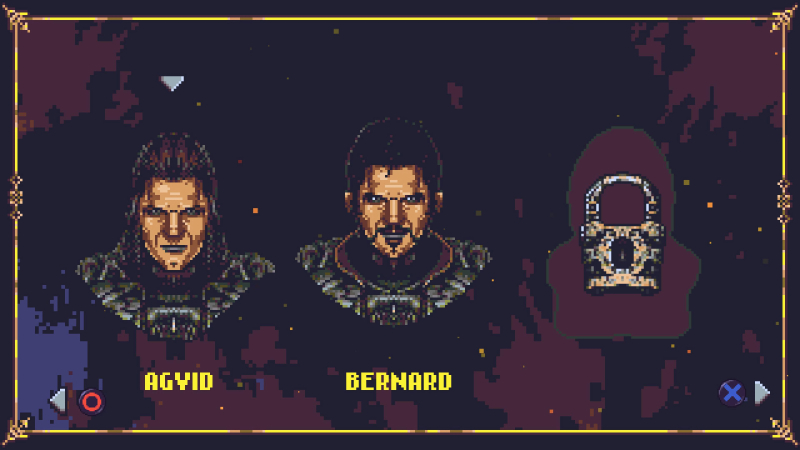 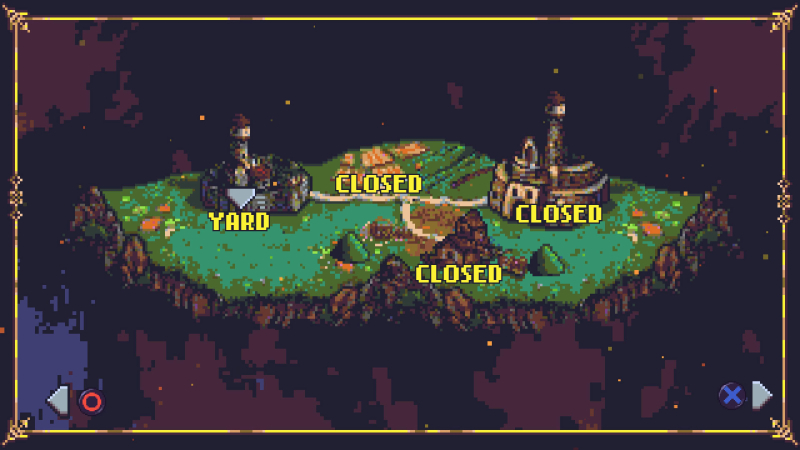 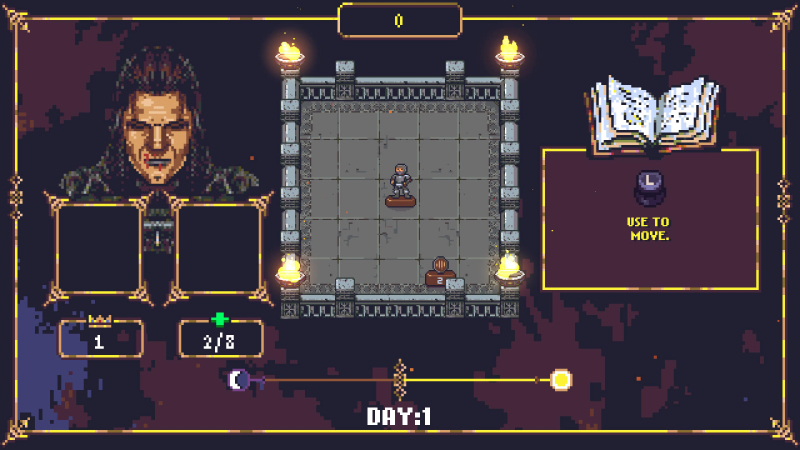 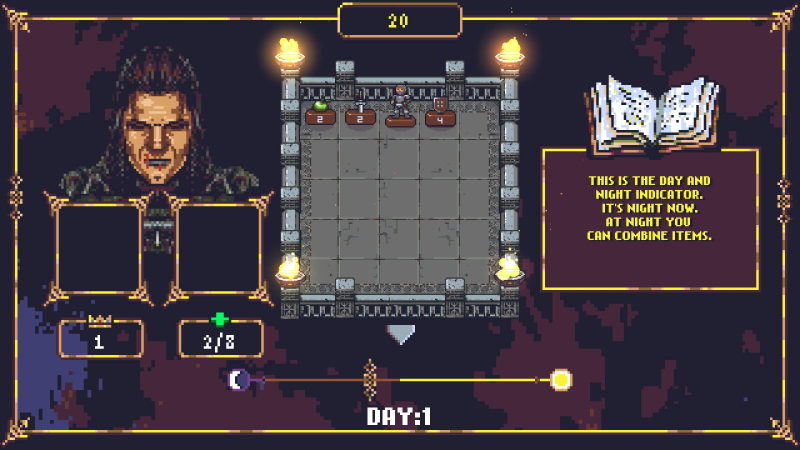 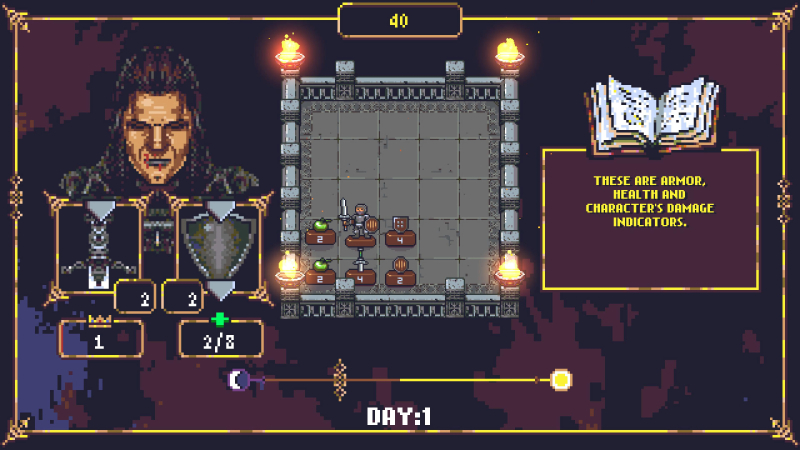 The second level is a lot harder than the first, so getting through it without dying and defeating the boss can be a challenge but with my tips below it shouldn't be a problem. 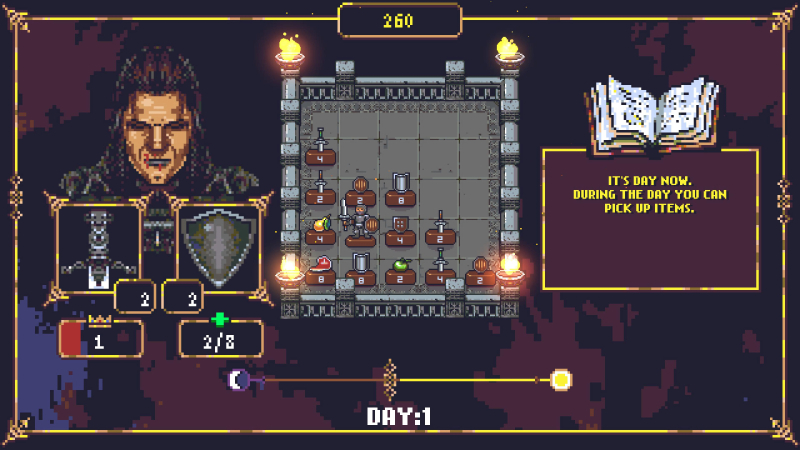 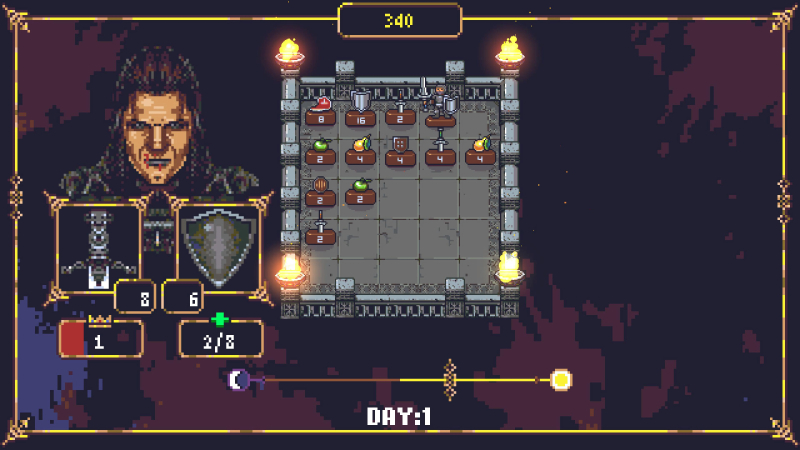 I'm not sure if this would be considered a bug or exploit, but I found a way to cheese your way through the game by grinding resources. Because the enemies don't actually attack you unless you're next to them and move away from them, you can position yourself right next to them then keep moving up and down (or left and right depending where you are) so that both you and the enemy move to the top then bottom of the screen. They'll never attack you because you're moving sideways rather than towards or away from the enemy.

Keep doing this over and over as the days pass and you'll pick up any new items that appear, increasing your stats. Thankfully the enemies stats will max out at whatever their max health is, for example 64, so even if they pick up swords or shields, you will always be able to get your stats higher. It'll take a lot of time and a lot of pressing up and down, but if you grind it out enough, you can be so overpowered that you'll be able to defeat all of the enemies in the level. You can either do this at the start of the level and increase your stats a lot, or just do it if you're running low on health mid-level. It takes the difficulty down to a 1 because with enough time, you'll be able to get through any level but it will require a lot of boring grinding. Thankfully I used a Remote Play Macro and left the game running for a few hours as you'll see in the screenshots below I ended up massively overpowered.

Additionally, you'll always know if you can defeat an enemy if you've gotten their defence and attack down to 0 and you have more health left than them. Even if your defence and attack is 0 too, you'll both do 1 damage to each other whenever you attack them. If you have more health, they'll die first so just keep spamming attacks as the days pass.

Step 1:
Get into a position facing an enemy like the screnshot below, then just press up and down constantly. New items will spawn into the empty gaps which you'll be able to pick up during daylight. The enemy will also pick up items in their lane, but as you can see their attack, defence and health is all maxed out at 64 so it won't actually do anything to them. 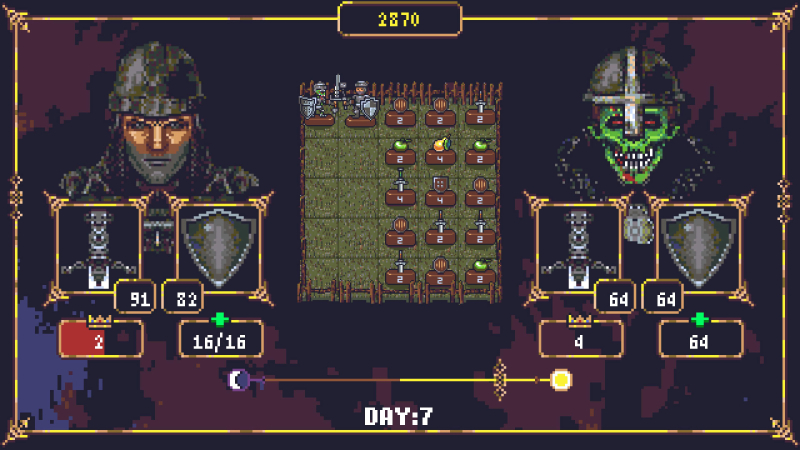 Step 2:
Keep moving up and down until you've got enough resources. I went a bit over the top with this one but as you can see I'm more than strong enough to defeat anyone now. Collecting and combining so many items will also eventually rank you up to 6 meaning the next enemy you fight will be the boss. If you do the game 'properly' it can actually be quite hard and will take a lot of brain power to figure out the most efficient movements, plus some of the enemies can be quite tough and it's hard to get their health down without needing to grab resources which will often help them increase their health again, but if you follow my exploit above the game will be a 1 out of 10 although it'll take a lot longer. 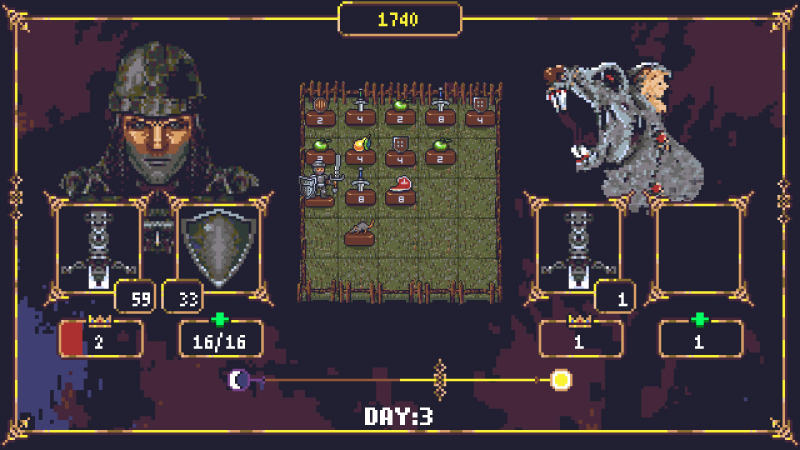 Using the exploit will make the game take a lot longer, but will make it much easier. If you get lucky or just use your brain properly you could definitey grab the Platinum in under an hour. 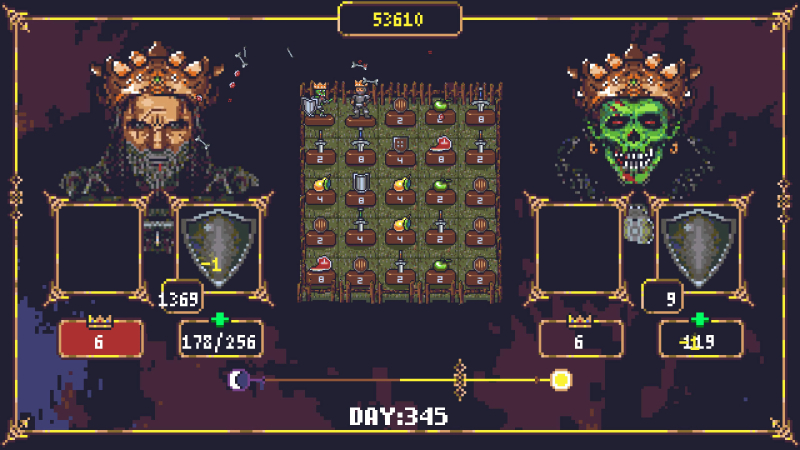 7/10
I was more confused by this game than anything else. The Platinum wasn't too difficult or time consuming but it almost felt like random luck would affect if you were strong enough to defeat enemies for the most part. Doing it properly can be a bit frustrating as you can lose 20 minutes of gameplay if you die and need to restart a level, but with the exploit it should be impossible to die. 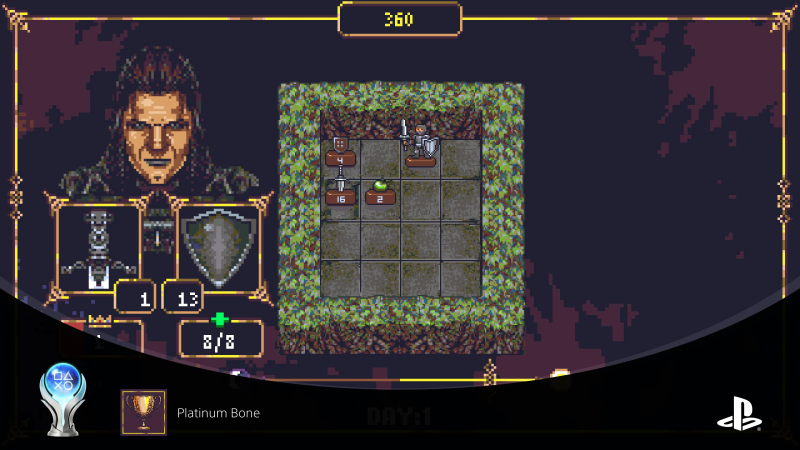 7/10
It was an interesting game to get my head around. You can relax and take your time with it but if you're like me, you'll also want to rush it and give up on the idea of using logic in place of mashing buttons randomly. Some people might enjoy it but I can't really imagine myself playing this if it wasn't for the quick and easy trophies. 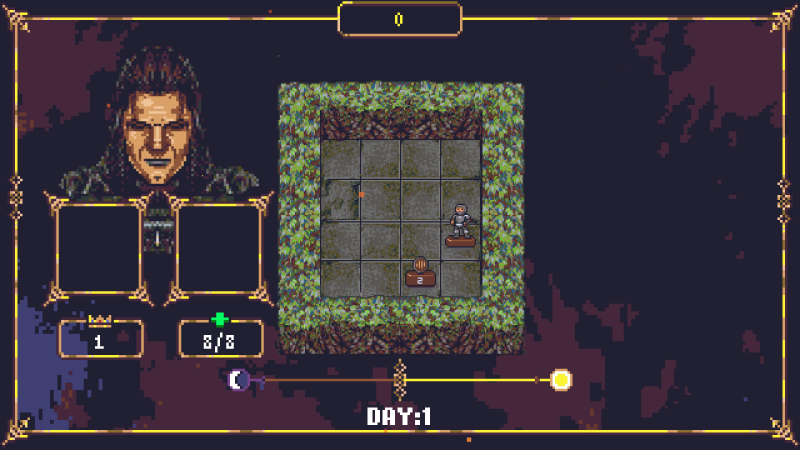 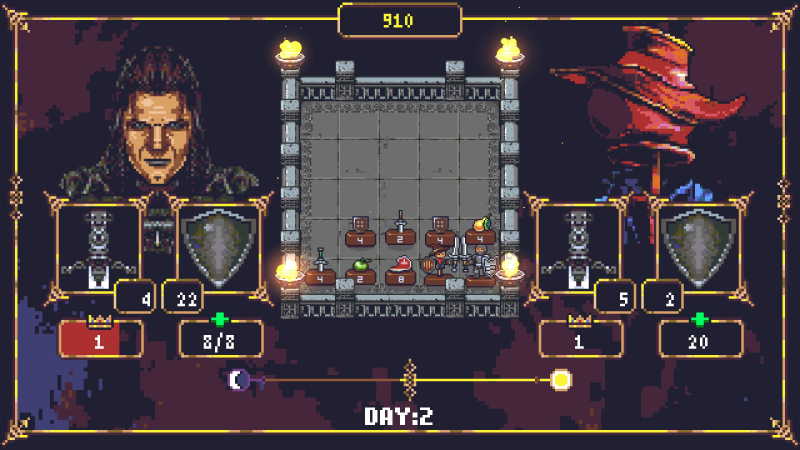 View all of my Platinum Trophies
This article has been viewed 621 times. Thanks for your support!