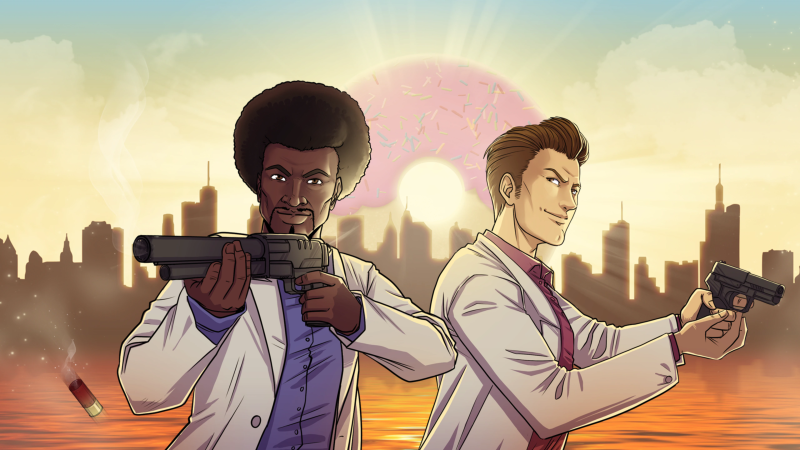 Clean the streets - or leave them soaked in the blood of your enemies - as one of two super cops with a hatred for crime in this quick, easy and fun 2D shooter with a 15 minute Platinum!

Donuts 'n' Justice is a 2D sidescrolling shoot-em-up where you blast away at nearly anything that moves. There are a variety of different enemies, but the end goal is the same... Kill them all! As you take down criminals they'll drop one of many power-ups, whether it be cash which can be used to purchase new hats - some of which come with added benefits, weapon crates which contain a random weapon upgrade, body armor offering you a bit more protection, police badges which eventually unlock new weapons in the crates or the most important item for any cop - donuts! There are two types of collectable donuts; pink ones which give you back some health and green ones which slow down the gameplay and make the screen wavy for a short while.

Control-wise, you can move in all 4 directions and you'll need to in order to avoid enemy gunfire and hazards. The screen will continuously move to the right but enemies can attack from both in front of and behind you. Thankfully you can fire in both directions with L1 / L2 / Circle to fire backwards and R1 / R2 / X to fire forwards. You can also throw grenades with the Square button. Depending on the weapon you're holding, shooting generally involves a lot of button mashing, but thankfully the stages aren't so long that it becomes frustrating or uncomfortable.

There are difficulty options in the settings and if you go with "Thumbsucker" the game will be incredibly easy as the enemies will drop a lot more donuts to keep your health topped up. This doesn't affect the Trophies in any way so I'd recommend that if you're going for the Platinum. 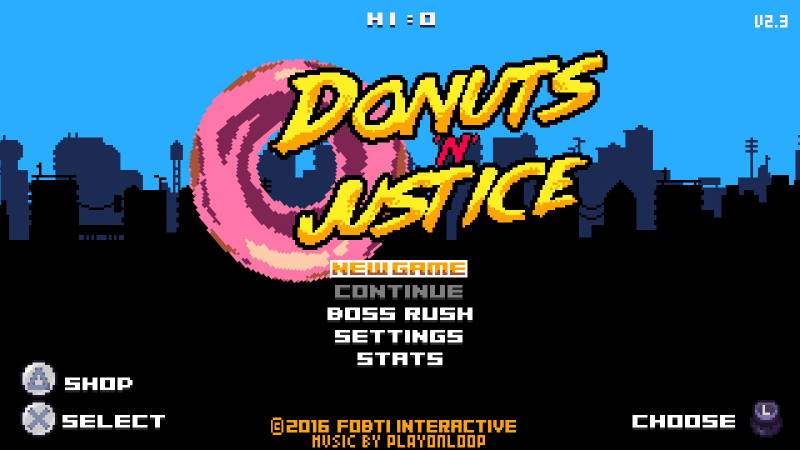 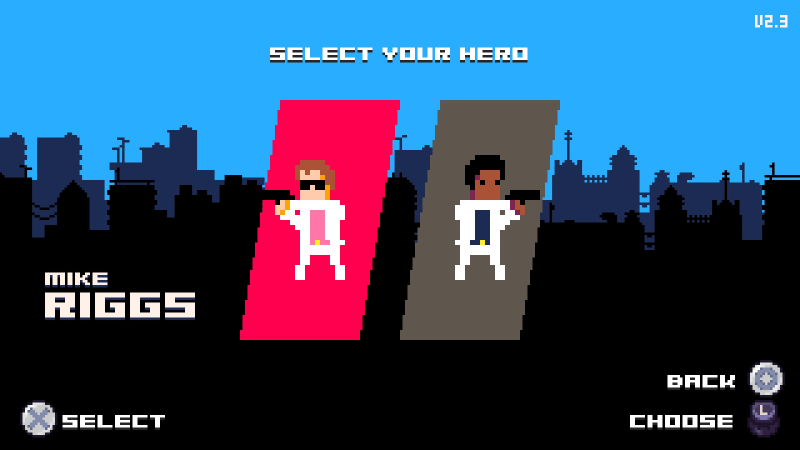 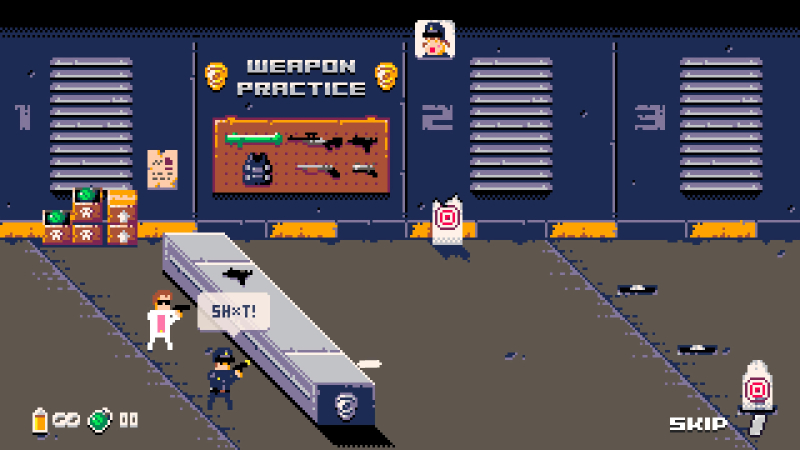 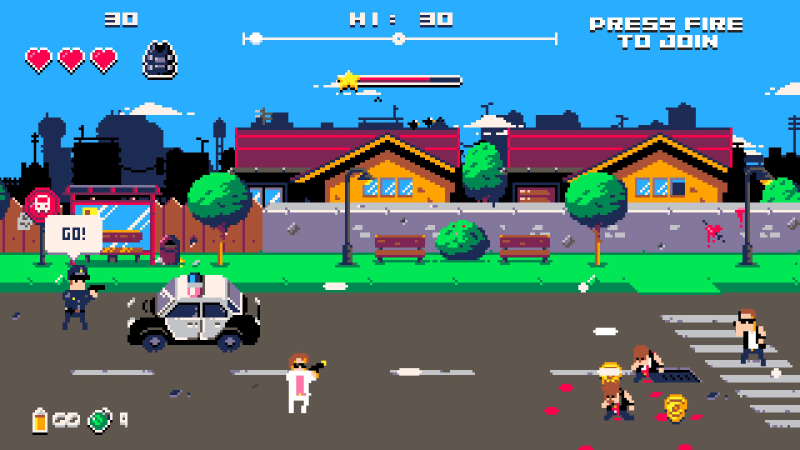 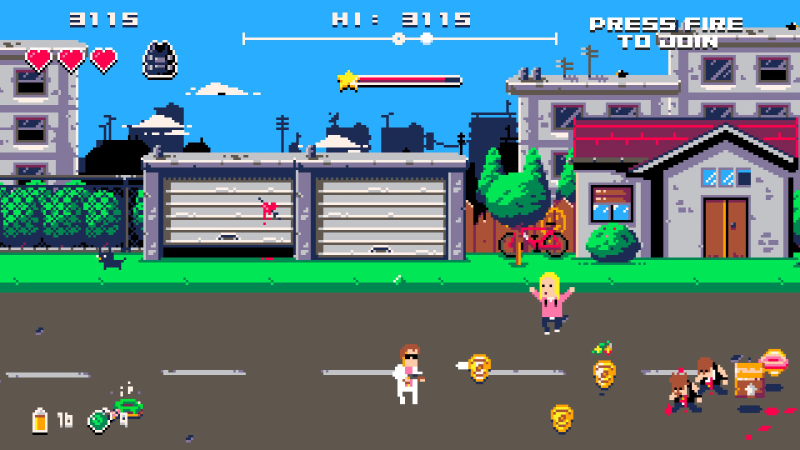 None of the trophies are difficult in this game and you should get them all by the time you finish a single playthrough, especially if you play on Thumbsucker difficulty. 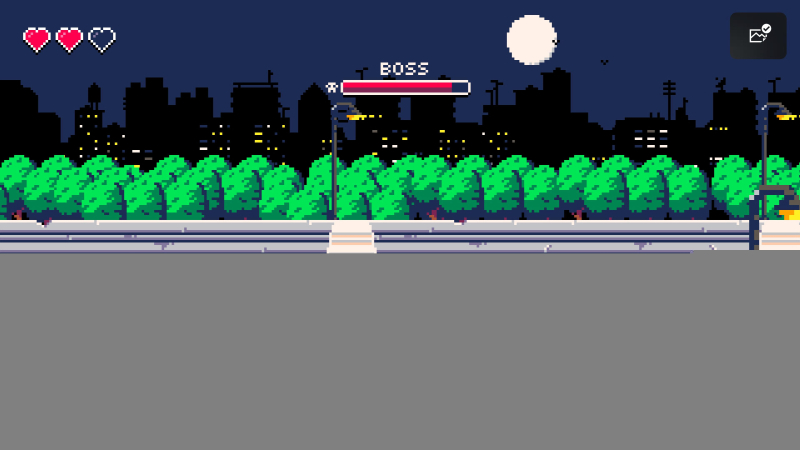 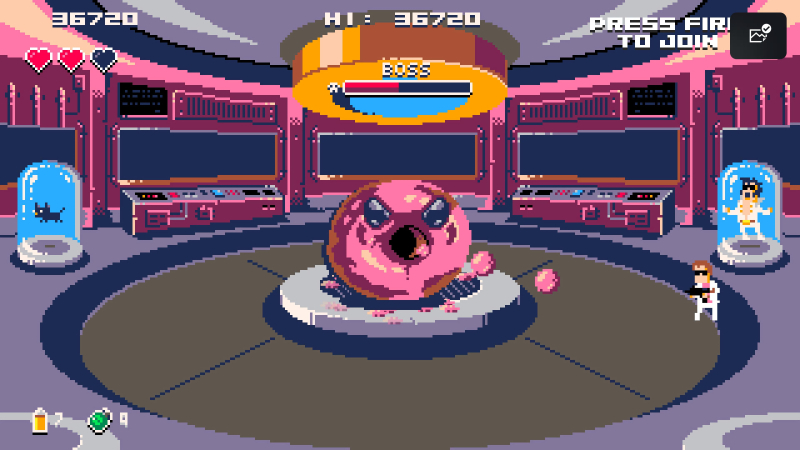 There aren't really any exploits, although if you have access to a turbo controller it'll certainly take some of the pain out of constantly pressing the shoot button. Otherwise, I suggest you play on Thumbsucker difficulty where there are plenty of health collectables making it pretty difficult to die. On the subway level make sure you stay on the lower part of the level as unsurprisingly, you'll die instantly if you walk onto the tracks and get hit by a train. 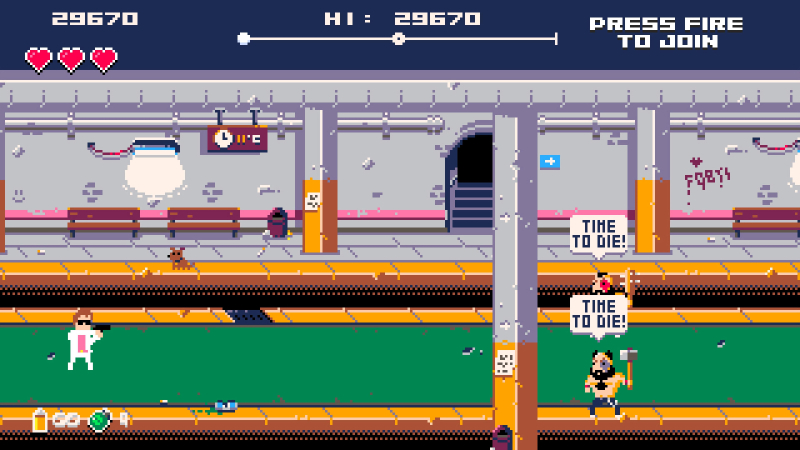 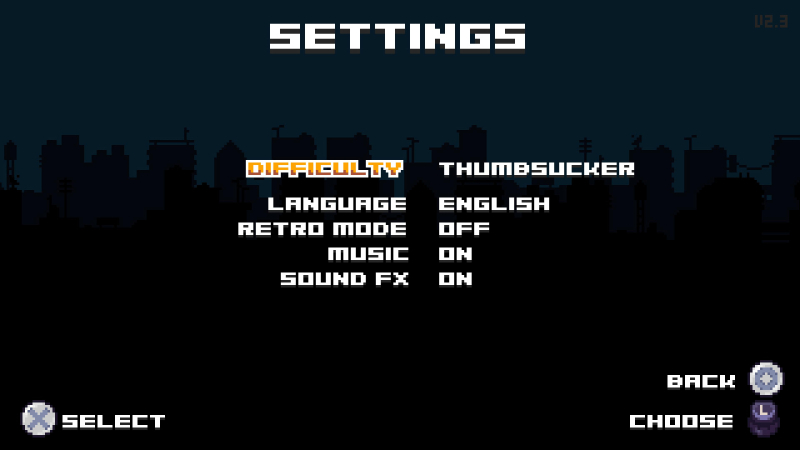 On the easiest difficulty, there should be no problem getting through this game. If you die on a level you have to restart it, but they only take a few minutes each. The hardest part is just mashing the fire button constantly. 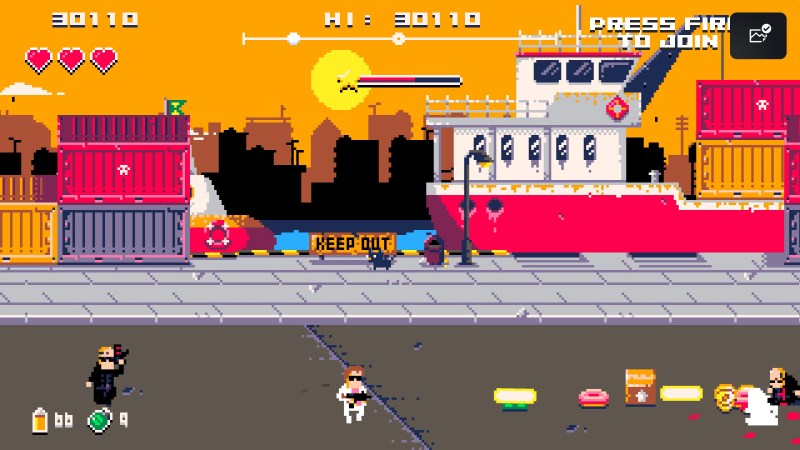 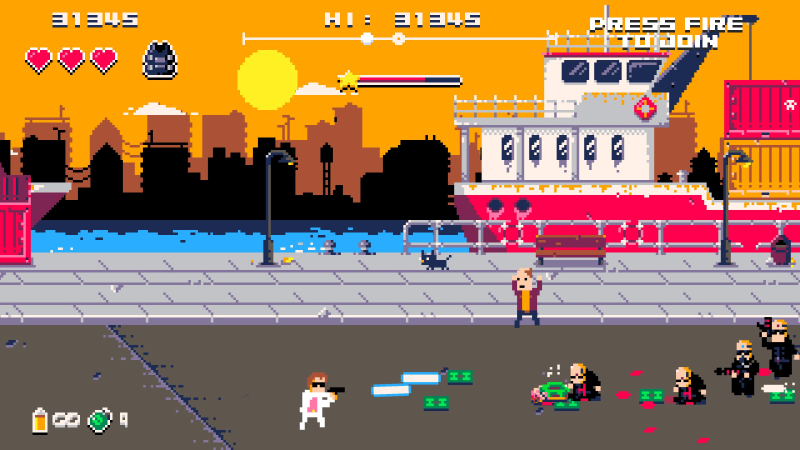 This just requires one playthrough of the story - of which there are 5 stages with a few bonus levels and boss fights - then for you to purchase a hat from the shop on the main menu and you're done. It's a very quick and easy game. 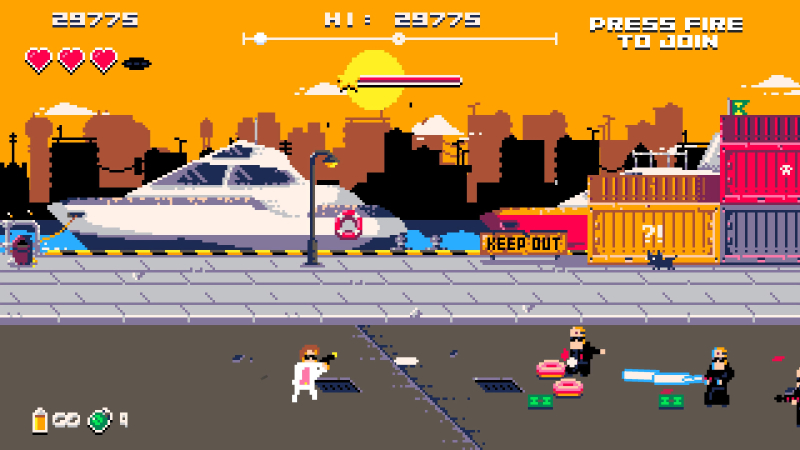 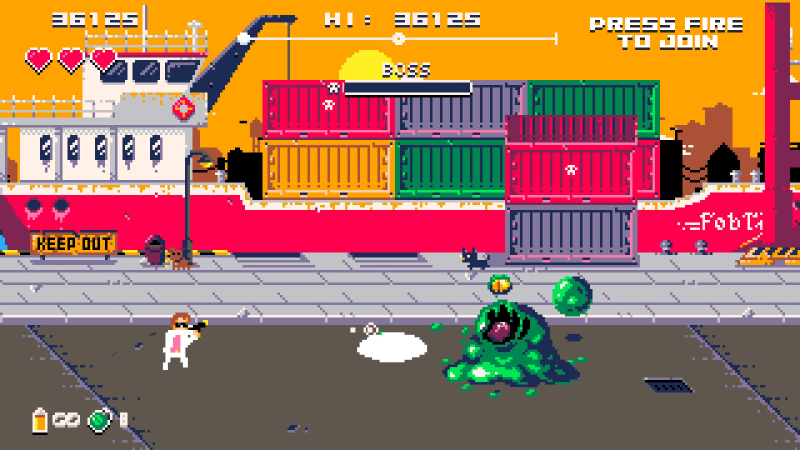 10/10
I really enjoyed Platinuming this game. There wasn't much of a challenge and it was quick and easy. I played it back to back with the PS4 version and if it had 10 stages instead of 5 I'd still have enjoyed it. 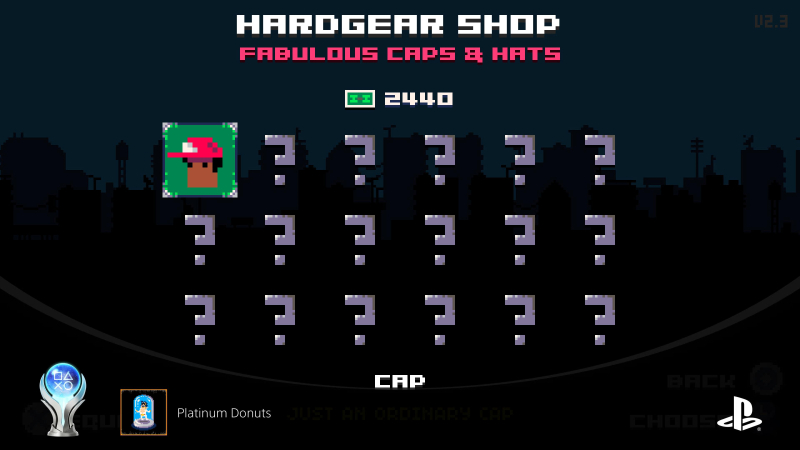 9/10
The graphics are retro-styled but nicely designed, the soundtrack is great and the controls feel pretty smooth. Having to mash the shoot button with your pistol is a bit hard work but the short levels and automatic weapon upgrades make this less of an issue. It's rare for me to say it, but I wouldn't have minded the game being a bit longer as I really enjoyed blasting away at the different criminal gangs. Definitely recommended for everyone! 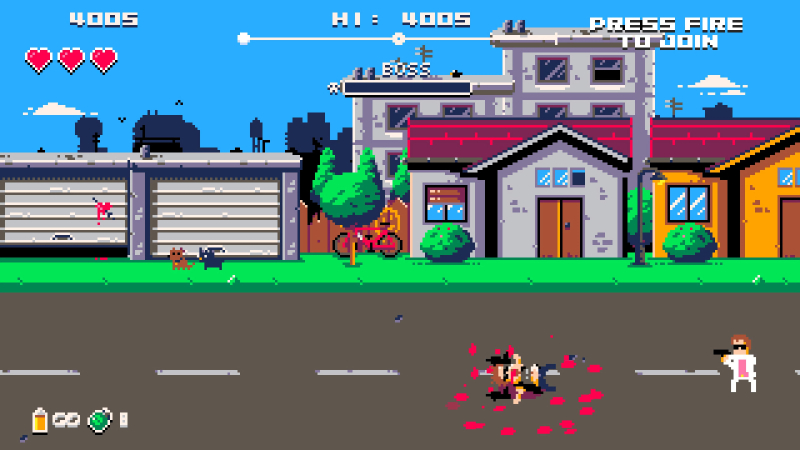 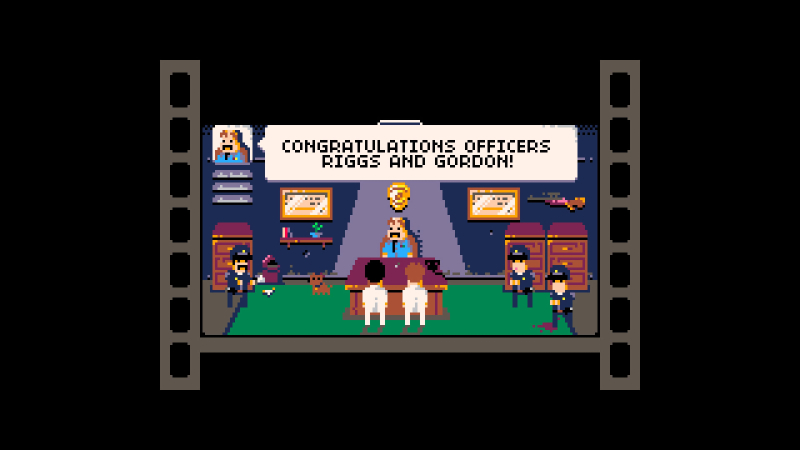 View all of my Platinum Trophies
This article has been viewed 790 times. Thanks for your support!